Hangzhou/West Lake – a wonderful, relaxing, lake-side retreat to recharge and recenter before your next stop in the mad-packed land that is China.

A friend of mine, when I told her that I was going to see the “silver lake” she questioned it and said “okay, if you really want to see the grey lake”.  I get it, and it’s not the place that you would spend an enormous amount of time, but I must admit that I really liked it here.  Granted, it was hot, and teaming with people, but it was also oddly calming and tranquil and I enjoyed it immensely.  Advice to the reader: West Lake is a lake, and thus water, which means that there are also mosquitos everywhere.  Bring mosquito repellent!

Further advice: Hangzhou and West Lake, to my surprise, had the fewest number of people who even spoke a modicum of English so be prepared to do a little pantomime, and be sure to have the names of where you are going written out in Chinese (you should do this everywhere you go in China or you will be in a pickle!).

The Shangri-La hotel is in a prime location on West Lake: you literally can walk out the door and either walk along the Su Causeway or the Bai Causeway.  It was for this reason, and despite the various “unfavourable” reviews that I had read, that made me stay here.  And for that reason alone, I would say that you can stay here and you will be fine.  And I will say that the staff are fantastic and go well out of their way to help you!  But the hotel is a bit tired, and you do pay for your location which I had a little trouble justifying in my head, especially for the breakfast since there are no other options nearby, so just be prepared and you’ll be fine

If you want something exciting and just a bit more of a walk to the causeway, I think I can safely recommend The New Hotel (http://thenewhotel.com/).  The name alone makes it difficult to find on a web search, and thus I would bet just as difficult for a taxi driver to find, but the lobby and the outside look stunning and I did wish I had stayed here.

All of the major chains have hotels around West Lake so if you’re not comfortable trying something different, pick your favourite and you probably won’t go wrong.

After more than a week of Chinese food, I thought I might be in need of something different so, after reading some glowing reviews, I ventured to the Sawasdee Thai Restaurant.  Unbeknownst to me, the Thai restaurant is in the Wyndham hotel on the north east side of the lake, and although I don’t typically dine in hotel restaurants unless I can avoid it, I must say that food was outstanding!  The staff were great, and the “amuse bouche” that was brought out was stunning: betal leaves with a variety of toppings like onion, peanut, coconut, and of course chillies, with a sweet and sour sauce is now what I dream to have again!  The prices are little higher than many other places that I visited in my travels, and probably 3 times as much as the restaurant the night before (not worth reviewing), but at the end of the day, the food was worth it and we are really only talking about $30!  (Yes, that inexpensive!) 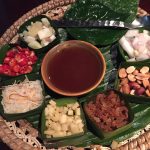 You can’t come to the West Lake and not walk along the causeways.  If you can go early, before the heat rises as well as everyone else who will be taking a stroll, you’ll have better and somewhat unobstructed views of the lake and downtown Hangzhou. 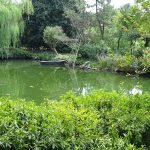 You will also be remiss if you don’t take a “pleasure boat” to Small Yingzhou Island in the middle of the lake.  It really doesn’t take long to navigate the entire island, and the boat trip to and from is relaxing and, depending on how much walking you’ve done, a welcomed respite for your feet.

But the one thing that I enjoyed, which no one really recommended, was the hike up to the Baochu Pagoda and back down by the Baopu Daoist Temple.  It’s a hike, with a lot of steps, but the views are stunning and to see something that isn’t quite so touristy, and certainly less crowded, I loved it!  You can also hike a little higher to one of the highest points in West Lake, which I didn’t due to time and hunger, so if you have the time, I think it’s worth the extended trek! 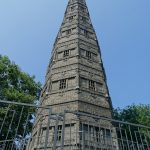