Vignacastrisi – a tiny village of remarkable strength and beauty

I lived in Rome for nearly 6 years, and I visit at least 2 times a year, and hands down, Vignacastrisi has got to be the smallest village I have ever stayed in.  Yet, it was worth the adventure, and something that I am confident I will never forget about, even if my travels don’t take me back to this small town but, instead to new tiny village adventures!

From what I can tell, there are few B&Bs, and a couple of agriturismos in Vignacastrisi, and one other establishment (but a hotel?) called the Palazzo Guglielmo (http://www.palazzoguglielmo.co.uk/).  I’m not sure how I found the Palazzo, as there is literally nothing to do or see in this tiny village, but it is an absolutely amazing oasis of call and rest in this out of the way village.  The breakfast  is absolutely stunning and the cappuccini (yes, plural, because they were so good that I had 2 each morning like a little piggy) which made for the perfect start to a relaxing day! 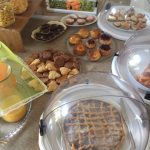 The Palazzo has a small pool, but not really room for more than 8 people, and not all in the pool all at the same time.  The rooms are large and spacious but quite open to the other guests unless you close the door-windows (I would beg for curtains so that a little light could come in rather than cave-darkness, personally). The ground floor rooms have their own tiny gardens (often shared) where you can continue to relax and read.  (Note to the readers: there are no telephones in the rooms, nor are there TVs, but the WiFi is pretty good so that you can stay connected.) 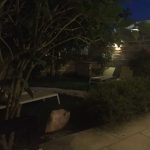 This really is an oasis because, within the walls of the Palazzo (and the nearly city block that they have assumed) you have all that you want and English is a nearly perfect second language for those who don’t speak Italian. I heard a number of people saying that this is the umpteenth year in a row that they’ve gone to the Palazzo and I get it: it’s an oasis, without   the stress of having to speak Italian, and a gorgeous opportunity to relax and unwind.  (For the record, I never spoke English at any time in the Palazzo or surrounding areas.)

I’m embarrassed to admit that I ate at the same restaurant 3 times while I stayed in Vignacastrisi.  But my goodness was it worth it!  The Casa dell’Angelo  is part  of the Palazzo with both an entrance from the Palazzo grounds, as well as from the outside, and the chef is an absolute genius!  On my first night, the Palazzo had let the staff now that I was vegetarian and it was amazing.  Oh, and the wine list, was  incredible and the staff so knowledgeable that not only did I have a constant smile on my face from the wines  I tried, but I also have ordered a case of my favourite wine upon returning home!  But back to the food: on subsequent nites, the staff made sure that I didn’t have the same food as previous evenings and suggested new wines to try.  It really was that good! 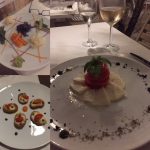 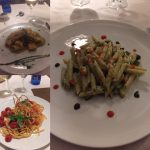 As I said, I’m embarrassed  that I ate at the same place every night which is not something that I normally do.  In my defense, I was to eat at the Agriturismo L’Aia (https://www.aiadisangiorgio.it/) which I heard was wonderful but they were closed the night I wanted to go and on the following night, the torrential downpour and 10 minute walk in said downpour played against me.

Neighbors at the Palazzo recommended the Pizzeria La Stua (never found in any of my searches) (https://www.facebook.com/lastuavigna/).  Although they admitted it wasn’t fancy – “it has paper tablecloths” – they said the pizza was fantastic and the pasta, although simple, was delicious.  And it’s very family friendly.  I wish I had known as I would have tried as the mere word “pizzeria” makes my mouth water.

Truly, there are no sites in Vignacastrisi.  Upon my arrival at the Palazzo, and because I had already broken out in to a sweat – it was HOT and humid – I asked for a map and was given one of Lecce.  So I asked for one of Vignacastrisi and was told that there’s not much in the village but still printed out a Google map so that I didn’t get lost.  In less than 1.5 hours, I had traversed the entire village, and every street.

On a subsequent day, in between rain showers, I walked to Castro, a larger village with a marina and “beaches” a little over 2 km away.  It was a lovely walk, and good to be moving, but there wasn’t that much to do and see in Castro either.

So, why you ask, should you go to Vignacastrisi or any of the surrounding villages?  Because it’s a part of Italy that if you really want to know more about, it is integral to the fabric of this culture, and these people, that I so dearly love.  Italy is more than Milano, Firenze, or Roma but small communities that exist and even thrive on their uniqueness and it is fun!