Canakkale is really an interesting little village right on the Dardanelles whose major claim to fame is Troy.  As such, Canakkale is pretty much the only place to stay if you want to take a dolmus (really, a public mini van) to the ruins of Troy.  Although your primary reason for coming to Canakkale is to see Troy, don’t miss out on the village itself.

Because this is the closest place to Troy, there really are a number of hotels to choose from.  And all are within easy walking distance of the bus station.  My personal choice here is the Hotel Kervansaray (www.anzachotel.com).  The hotel comprises the original, old home, and the newer addition that has been added on to the back.   If possible, get a room in the old house; the ceilings are high, you have views to the garden or street, and it really is charming.  Although I did not see the new edition in the back, it looks modern from the outside so I would guess that it is quite modern (and staid!) on the inside.

In terms of restaurants, most of them are situated along the sea-front so they are, unfortunately, a bit on the touristy side.  As with most places, I am certain that there are better restaurants “inland” but since I was only there for a couple of days, I couldn’t tell you.  But fear not!  We did go to Yalova Restaurant which, yes, was on the sea front, but just a bit removed from the tourist traps.  The food was incredible – except for a vegetarian – the wine list about as good as we saw, and the views of the sea outstanding.  In fact, the night we were here, my friend said “my birthday would be perfect if I saw a dolphin” and, 2 minutes later, 3 dolphin were seen jumping in and out of the sea!  It really couldn’t get any more perfect than that 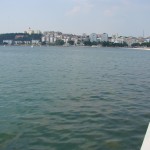 But, as I mentioned earlier, Canakkale is all about Troy.  In fact, the movie was filmed here and in the surroundings and, as a result of the filming, the film crew left a replica of the Trojan Horse used in the film for the tourists to marvel at.  (Yes, I did see it, and I did take a picture, but…)  If you need a souvenir of your visit, you will find it: every store, shop, and vendor has “trinkets” that you can take home so don’t worry.  But let’s get out to Troy. 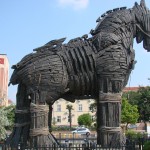 If you aren’t part of a guided tour group, getting to Troy is interesting.  You have to buy your ticket in advance at a kiosk near the bus terminal and where the boats dock. But then, to get to Troy, you have to go to a different place that is a good 10 minute walk away.  And be forewarned: there is no “terminal,” there is no shelter (from sun or rain), and there isn’t much in terms of “grabbing a bite to eat” while you wait for the bus.  In fact, you get the bus under a bridge and the bus, is really a mini-van that goes back and forth.  But it’s all relatively civilized if you have the right frame of mind.

Once the dolmus drops you off at Troy, you need to walk about a km to get to the actual site.  It really is quite odd, but when your not part of a tour group – and why would you be – you are a bit second tier.  Once at Troy, let your feet guide you: there is no specific route, per se, and you can pretty much go wherever you want.

Troy is one of those places that you have to go visit in your life.  And if you are in Turkey to see Efes, then Troy is a natural part of the trip to include.  Would I return to Troy?  No.  (I would Efes!)  Am I glad that I went?  Yes.

The ruins of Troy are really quite simple and I suspect that if the Turkish government had more money, or there were other groups interested in excavating the site, more treasures would be found.  Given that Troy comprises 6 different eras – all of which can be seen in one way or another – one can only imagine what has yet to be found.  But what I found most enchanting was the ability to wander wherever I wanted, almost like a young child exploring. 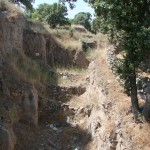 All in all, I think we spent about 3 hours at Troy exploring and this was plenty.  If you needed to do it faster, you could: some of the tour buses came in after us and left before us. It’s a shame and also a reality I am afraid.

This entry was posted in Asia, Turkey and tagged Canakkale, Trojan Horse, Troy. Bookmark the permalink.