Selcuk is an interesting place and one that is hard to recommend to be honest.  If it weren’t for its proximity to Efes (Ephesus), I wouldn’t even recommend it.  But because it is the closest place to stay for Efes, I have to mention it.  But here’s the deal: only stay in Selcuk for one night.  The best itinerary would be to arrive in Selcuk at night, go to dinner, get some rest, and then head to the ruins that are Efes the following morning.  And when you are finished with Efes, either get on a bus or take a flight out because you have now seen all that there is to see in Selcuk.

The sheer paucity of hotels in Selcuk is staggering.  Perhaps this is a result of nothing more to do than to visit Efes.  In Selcuk, we stayed at the Kalehan Hotel (http://www.kalehan.com/) which is one of the better hotels in Selcuk.  And thankfully, our hotel in Alacati knew the owners (see post on Alacati, Turkey) so we were upgraded to a bigger room that was, apparently, much quieter than others.

The hotel is not 5 star and really closer to 3 star, but the staff are kind and the rooms clean.  If you look at their website, they are true to the “allure” of the hotel: its all out kitsch.  And, interestingly enough, the only hotel in Selcuk that does not have a shuttle from the train station to the hotel or a shuttle to Efes.  But for one night, this will do.

Dining options in Selcuk are pretty limited and uninspired unfortunately.  On our first night in Selcuk, we took a walk in search of restaurants and when we found one we liked, that’s where we went: Eski Ev (Ataturk Mah 1005 sk, No 1).   The staff were really pleasant and although the food was uninspired and they never seemed to have the local beer in stock, it worked.  On our second night in Selcuk, we looked for another restaurant to try and, in the end, went back to Eski Ev.  (I told you one night was enough in Selcuk.)  Our waiter – the same from the night before – was really kind and after seeing us a second time, spent some time chatting with us and telling us about his life in the army and school.   It was sweet and added a bit of charm to a really rather bland town.

But we weren’t in Selcuk for the town.  We were in Selcuk for Efes.  And it did not disappoint! After the above description, I may have put you off of Selcuk as a whole.  Don’t.  I just want you to know what to expect before you head go.  Because you must go for the sole matter of seeing Efes.

The only way to describe Efes is breathtaking.  It really should be one of the sites on every person’s list of “things I must see before I die.”

We walked the 5+km from Selcuk to Efes in the morning calm and it really was lovely.  If you have the energy and inclination to do so, I highly recommend it.  But remember, once you get to Efes, you will have another umpteen km to walk in the site so be ready.  Because we walked, we entered from the south entrance.  Most people enter from the north.  But by entering from the south, and because we were walking, that meant we walked all the way to the north gate and then had to walk back down past everything we already saw.  But if I do say so myself: it’s worth it.  By retracing your steps, and even going in different directions, you have the opportunity to see things again, in a different light, or something that you didn’t see because of the tour group in front of it.

I can’t really make a recommendation of what you HAVE TO SEE; everything is breathtaking and worth as much time as you can give.  The Church of the Virgin Mary was especially important for me and I will be forever chuffed that I was able to see this amazing ruin.  As the story goes, it was the first church in the world to take the Virgin’s name and was also the place where Mary went after Joseph died.  It is also rumoured that Mary’s house is at the top of a mountain overlooking Efes (but this is a LONG hike uphill and really only reached by taxi which is a scam, unfortunately). 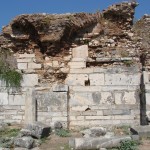 Another thing who’s mere size is overwhelming is the Library of Celsus.  We’ve all seen pictures but until you see the sheer size in all its detail and grandeure, it really can’t be understood: from every angle you see something new, some detail, and some play of light and shadow. 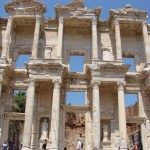 And finally, and regardless of where you start from, don’t forget to go to the Great Theatre.  I am, and always will be, partial to the Colosseum in Rome, but this is definitely a very close second. So make the effort and hike to the very top of the Great Theatre and just have a think about the surrounding lands.  If you look straight out, way off in the distance, you will see the water.  And then think about this: Efes used to be a port.  One side of Efes was a port as well as a place to battle incoming combatants.

The other thing that I would recommend is to rent the headphones as you enter the site.  I don’t typically advocate this as I am always suspicious of the information that they actually tell, but in this instance, I was so chuffed that I did.  I leaned more from the audio guide than I did from the booklet and the free information that I received when I bought my ticket.